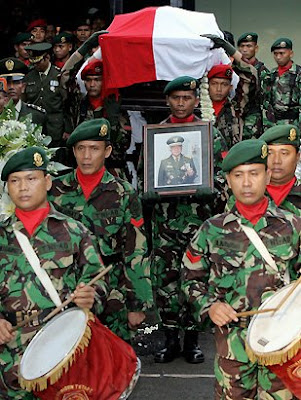 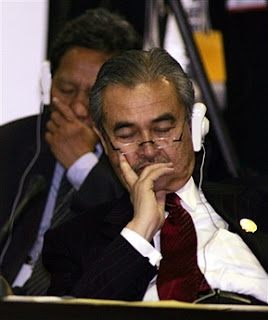 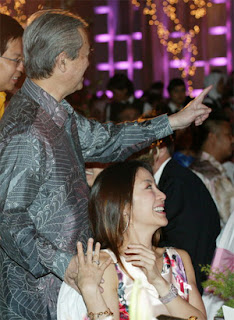 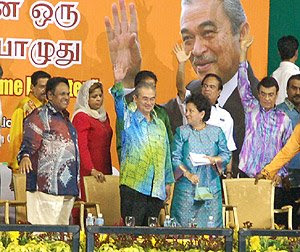 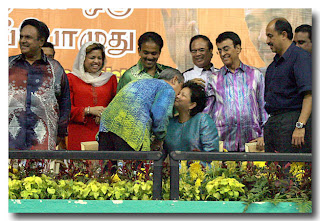 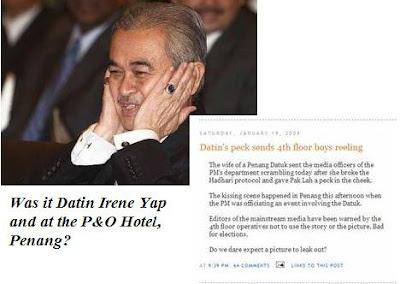 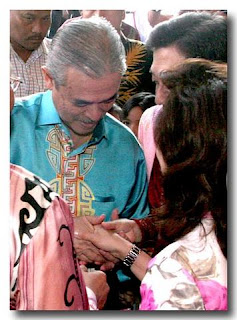 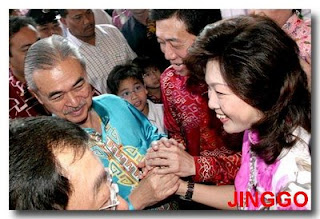 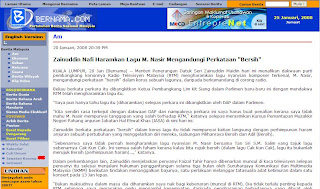 Duet: Dialah khazanah pintu terpilih
A a a aa aaa...aaaaa

A later addition to this old SMS joke:

Samy Velu/Musa Aman hmmmm? All mine!!!

"When she lift up her skirt, I lost my mind" said Health (former) Minister Chua Soi Lek

Nothing but a good sex scandal to liven up the New Year 2008. It's been awhile.

Of all the politicians, who would have guess Dato’ Dr. Chua Soi Lek to be the person to be caught in a sex scandal. It's not like he has a reputation of one former CM known as a lady's man like Tan Sri Rahim Tamby Chik .

Dr. Chua is actually a nice man with quite a long track record of service in MCA and the community. His revelation is similar to the closeted past of one former newly appointed MB in the past, Dato Abu Hasan Omar.

The mistake Dr. Chua did over those Ministers (who later resigned) is to be caught on video. He admitted that he did not record it. Fine, it is not entirely his mistake. To catch a romp on video, it requires someone to set up the camera. It must have been a room he regularly used. Since MPs tend to reserve the same hotel room at their constituency, he must have been set-up in one of the constituency trip. Someone actually pulled one on him.

The last time some politician was caught on video must be that Taiwanese lady-politician, Chu Mei-Feng. The last heard of her was as she turned into a singer. She actually visited Malaysia and attracted quite a crowd. Dr. Chua don't have to resort to that. He could go back to practise after the dust has settled.

The famous case of sex scandal on video was DP Vijandran in the early 90s. Who will not forget his prowse of non-stop 45 minutes without shooting and it comes complete with an entertaining Tamilwood wooing in the beginning. It was said that few tapes was circulating and it includes one beautiful Chinese newscaster as his partner.

There was this story of a guy being offered the "Vijandran tape" (No VCD and DVD those days) by some smut peddler for RM350. By any account, that is very expensive. He later told his officemates. Since quite a few of them already saw the first circulating tape, they agreed to share and everyone chipped in.

Come Saturday nite at the pad of one of the office Bachelor. Everyone came over with their beer, soft drinks and munchies ready for a night of sensation. The host had the seats all nicely arrange for a comfortable on. He set the tape in the player and played.

True to what was promised, it was a Vijandran tape alright. DP Vijandran was giving a speech at the most recent MIC General Assembly. Initially, everyone was really pissed for being conned but later laughed it off as "a good one".

DP Vijandran was at the height of his career in politics and said to be groomed by Samy Velu as a future leader of MIC. It was around that time that S. Subramanian was the Deputy President and he actually made a challenge on Samy. Vijandran was a lawyer, bachelor and even before the tape was circulating, had a reputation as a lady's man.

There was this story making its round in the bars.

Samy, Subra and Vijandran went abroad for a trip. They reached a place, book a hotel and each of them got a 'woman' for themselves for the night. The next morning all of them came down to have their breafast together at the hotel restaurant.

While having breakfast, Vijandran asked Samy, "Boss how was your woman last night?"

Samy answered, "OK lah. She was pretty, nice body and good 'service'. I think my wife was better. How about you Subra?"

Subramaniam answered, "I find her very pretty and exotic. She was quite a sexual partner, quite decent 'service'. However, this sin is not worthy. My sex life with my Mrs is still better."

In his excitement, Vijandran spontaneously slipped from his mouth, "I agree with all of you. Your wives were better!"

Karpal Singh, who exposed the tape, was going for his hide but the Attorney General lost all tape evidences. No case. Despite denying involvement, Vijandran resigned from politics and post as Deputy Speaker of Dewan Rakyat to return back to law. He later settled with a nice Indian woman from India. That was the last heard of him.

Unlike Vijandran, Dr. Chua did the commendable thing to openly admit and resigned. All exposed sexual scandal of politicans end up resigning, be it Jack Profumo or Gary Hart or Chu Mei-Feng.

The manner Dr. Chua made his admittance last week seemed to indicate he thought he could do an “Edward Kennedy”. If one plan to remain, politicians never admit mistake.

Clinton's denial was an art. He denied any sex because there is no penetration. The same way he denied smoking marijuana because he didn't inhale. Clinton got away from impeachment simply because they couldn’t get the Senate for a two third majority.

Even PAS's Mat Sabu was caught for khalwat in Kota Baru in the infamous room 121 in a Kota Baru hotel did not admit it. Damn that cough medicine! Syariah court acquited Mat Sabu for technicality relating to witness .

Dr. Chua refused to resign initially and prefered to put the ball back to the Prime Minister’s court using the “he appointed and so he has the final say” excuse. He said, “I have no intention of quitting my government and party posts.”

That puts the Flip Flop Prime Minister in a difficult position. He already fumbled in his reluctance to ISA the Hindraf 5, charge of attempted murder that was withdrawn on 31 Hindraf demonstrators (not a lighter charge!), and the use of Allah for Christian’s Malay publication.

Dolah is likely to Flip Flop again and Dr. Chua knew it as he claim of making all the necessary apologies. He said the tape was not made by him (Vijandran did his own taping) and he had it with a personal friend.

Personal friend? For a platonic friendship with the oppositte sex, one can have meals, tea, conversation or group outings or whatever. But not sex!

The possibility for him being able to claim receiving apology from his family could likely be that the women is his other wife or mistress or not-the-principal wife. This is the likely answer and normal amongst Chinese as this blog tries to justify.

This reminded me of one famous Dato’ KSU caught in a high profile khalwat case in early 90s. It turns out the woman with the Dato at the hotel in Johor Baru was his second wife and naturally the Syariah Court threw out the case. Due to the ongoing case, he missed out on an opportunity to be the KSN. Talk of bad timing!

Dolah may have been reluctant to make a decision for fear of the impact of a possible strain relationship with MCA may have an impact on the General Election. Look at the willing faces together at the PC in show of support for Dr. Chua. 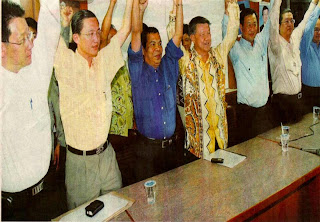 When the news was broken that MCA will meet to decide on its Vice President, it is not far fetch to think that Dolah was indecisive and may have requested MCA to decide. There was a clear reluctance in his resignation statements:

"I am proud that I have balls to admit my sins and save the taxpayers money to form panels to investigate my case if I did not admit but claim that the guy in the video isn't me, or my face was superimposed."

"By admitting, and apologizing, I should be forgiven. Instead people insist that I step down. I am sick of this 'holier than thou attitude'. It's like everyone wants to be ulamaks now."

His choice of words like ‘holier than thou attitude’, ‘taxpayers money’ and ‘Islam Hadhari’ seems to be a swipe at someone? Does that someone happen to have children and children-in-law that took financial advantage of his position? Someone whose children’s dealing put the country at security risk with the superpower? Someone whose sister-in-law put the country into an international financial scandal? Will that someone take the cue?

Dr. Chua could have stayed on, especially with his family’s support. No woman could readily accept such betrayal readily. It is never easy to mend a woman’s broken heart and feel of betrayal. Nevertheless, the family should stand by their father and stay united through this episode.

With reluctance or not, Dr. Chua’s act to resign is a much needed saving grace for the institution of leadership, after one shamble after another by the Prime Minister, his family and inner circle for the last two years. His courageous act of sacrifice has somewhat restored some sense of honour and integrity in the leadership.

This is one challenge of public life. Man with money, power and decoration is an attraction to some women. Men will be men, even how pious he is. There is a point of weakening resolve. The pursuit to public life comes with it's casualty of broken marriages. Common case of women unwiling to sacrifice the time and material for their husband. If it is a challenge to sustain a normal marriage life, think of the challenges to those in high places. One can only be so strong.

One politician used to boost that he never cheated on his wife and he believed in procreating everytime he consumate with his wife.

The friend asked him, “How many kids do you have?”

The friend replied, “So did it only twice with your wife?!”

After the dust is settled and life goes back to it's usual humdrum, his indiscretion will be forgotten eventually.

Dr. Chua also said, "I received 200 SMSes that say other leaders do the same thing (involved in scandals). Not only leaders from MCA, but from other component parties as well. I need not reveal who they are, but mind you I am not the first 'victim' and definitely wont be the last."

As the Malay say, “Pandai pandai tupai melompat, lama-lama ke tanah jua.” There are definitely many more naughty tupai out there! There is definitely more scandals than the names caught here. I am not being judgemental for I'm capable to succumb to such temptations. My reminder is if one had sucumbed and caught, do resign please!