How To Spot Whose Pants Is On Fire? 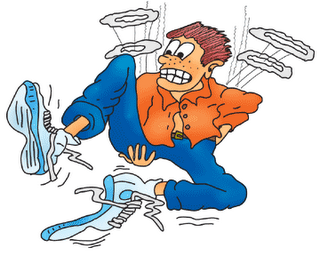 Whichever your preference, somebody’s pants is on fire. I've got a list of how to to spot the unseen smoke. 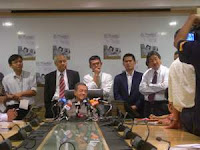 Q: When you stepped down in 2003 you said you made a gentleman's agreement for him (PM Abdullah Ahmad Badawi) to stay one term. In this case macam mana?

Dr M: Even if I said I had this gentlemen's agreement there is no way I can prove it. My thinking that since he was older than Najib he should be PM for a term and then Najib should be able to take over.

Expectedly Abdullah denied twice to say “…no gentlement agreement”. Najib, the safe player he is, denied knowledge. Is he implying it could happen but he was not personally informed? There is still that likelihood he is aware.

Lets put Najib out of the picture and pose the same question posed by blogger Syed Imran, Antara Mahathir dan Pak Lah - Siapa Pembohong? Yes, is this true? If not, who lied? What is the relevance? Really, who should care?

Lying is a cognitive signal of a person’s ability to understand what others are thinking. As children grow older, their lying becomes more sophisticated and believable by taking into account the cultural attributes.

Agendadaily saw the “boss” as “nampak relaks” thus believing his denial as genuine. By normal convention, it is fair comment. To make a psychological asessment of seasoned politician like Abdullah from his short denials, that is far from sufficient. Abdullah is no child.

I’ve spotted two websites – here and here – and summaried their tips into a list of pointers on how to spot someone whose doing a “Liar Lair Pants On Fire”. 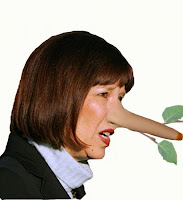 These are some ways you can get clues of deceptions and lies. But try not to get caught up in watching body movements that you forget to listen to what's being said. The best way to spot a lie is to see the whole story. People are generally bad liars. There are always holes in their stories. 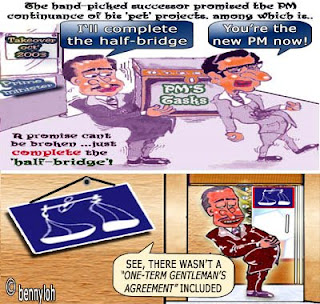 For me, someone who is still in politics, will tend to lie. Someone, who was recently caught lying, is still lying. Someone with much character flaws will be easily taken to lie and even believe his own lies. That someone believes the welcome, praises and adornment he received as real.

Whether he actually lied on this matter, it is irrelevant. Since that someone is in power and have been inefficient and incapable of handling the administration of the country, the burning cigerrette butt in his pants pocket will burn his butt.
Nukilan Husin Lempoyang Pada 12:14 PTG

Sdr Husin,
If i'm not mistaken, in year 2005 or 2006 there was a four eyes meeting between Tun M and Paklah organised by Tun Khalid. There was big big huha about it b'cos there is a hope the two of them can mend their differences. No it Never.
So will Tun M realase the recording of their conversation at that time and there is really a gentlemen agreement then Paklah should step down now. I strongly believed that Tun M has the recording b'cos it was published that he asked permission to recor their conversation.
So, Paklah watch ur back. We, Malaysian cannot accept a Liar PM.

Words are there is another person inside.

Its time for all Malaysians to wake up from their day dreaming. CNY is only around the corner and we hardly see any festivities moods around. Cautious - thats the word of the day. Our econonomy is actually shrinking under the new leadership - more toward domestic consumption.

What Tun M said is right b'cos it seem that PL don't hold to integrity but dragging his feet to ensure he is still in power. So many corridor but the is actually no new monies flowing in the market - just plain propaganda.

So Tun M show us the tape if it really recorded. Let's strip this guy naked b4 more damage is done.

Hi there!
I would like to burn a theme at here. There is such a thing, called HYIP, or High Yield Investment Program. It reminds of financial piramyde, but in rare cases one may happen to meet a company that really pays up to 2% daily not on invested money, but from real profits.

For several years , I make money with the help of these programs.
I don't have problems with money now, but there are heights that must be conquered . I make 2G daily, and my first investment was 500 dollars only.
Right now, I'm very close at catching at last a guaranteed variant to make a sharp rise . Turn to my blog to get additional info.

I am regular visitor of this website[url=http://www.weightrapidloss.com/lose-10-pounds-in-2-weeks-quick-weight-loss-tips].[/url]the-antics-of-husin-lempoyang.blogspot.com is filled with quality info. Do you pay attention towards your health?. Let me present you with one fact here. Research presents that nearly 70% of all United States grownups are either fat or weighty[url=http://www.weightrapidloss.com/lose-10-pounds-in-2-weeks-quick-weight-loss-tips].[/url] Hence if you're one of these people, you're not alone. In fact, most of us need to lose a few pounds once in a while to get sexy and perfect six pack abs. Now next question is how you can achive quick weight loss? Quick weight loss can be achived with little effort. Some improvement in of daily activity can help us in losing weight quickly.