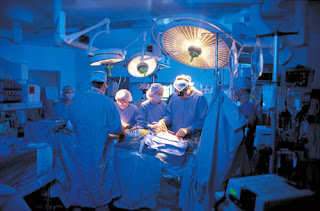 A Japanese man was boasting about how his country had such advanced medical technology. He said, "We take the lungs out of a man, perform an operation, put the lungs back in, and in 4 weeks, the man is looking for work."

An Englishman said, "We are far more advanced than you. We can take the heart out of a man, perform surgery and have him ready for work in just 3 weeks."

The American says, "That's nothing; we can take a kidney out of a man, put into another man's body and have them looking for work in 2 weeks."

The Malaysian says, "Well hell, that's nothin'. We had an idiot taken out of Kepala Batas, put in the Parliament and now half the country is lookin' for work!"

There you go, Malaysia Boleh!

When he became PM, he stopped few strategic projects vital to the economic and security infrastructure under the pretext of prudent spending which is really at the request of his Singapore minders. Two prominent ones are double tracking and johor bridge.

Then he destroyed the manufacturing sector. The 5-year IMP was postponed into 15 year masterplan "but no plan" of 2005-2020.

Proton was systematically destroyed. In addition to Proton, another high tech and high Malay involvement industry in the aerospace industry was disassembled. Both the so-called rationalisation program was actually an asset robbing example MV Agusta and Airasia financial scandals.

He backtracked the country into agriculture with the so-called excuse of food security, import substitution, and halal hub. What food security? We went exotic products instead of bread and butter food products. What happened to the Food Fund of RM1 billion presented in 2006 parliament?

He talks of food supply chain, konon untuk membina peruncitan Melayu, but he end up and will end up killing a Melayu who is strategically building ie Syed Mokhtar.

Realising he has not done anything worthy, he launched the Economic Corridors. It is basically repackaging the economic project and plans of the past into corridors. Even the grouping is not original for it has existed for purpose of economic planning since merdeka.

In Johor, the WPI will be used to enrich the cronies at teh expense of selling to Singapore. Singapore will expand its population to 10 million in 20 years time from the current 4 (or is it 6?) million by importing foreigners. Idiot DOlah will be welcoming them with open arm. Eventually they will make resident in Johor and tehir off spring will citizens. So much for WPI as Malay UMNO stronghold.

Idiot talks a lot of Modal Insan. WHat is that? Project for cronies to build schools and half past six universities and colleges. His modal insan program is only abt schools and unviersities. In the meanwhile, more than 100,000 jobs were lost and truely educated, trained, and experienced expertise are lost abroad or out of job.

Despite the strong message from the voters, idiot has not put forward a true economic plan to bring growth, build the right capacity for the future, and strengthen (instead weakened by his insecurity to the tingkat 4 budak hingus) capability. There is no innovation introduce during his terms.

His economic plans is lined with tingkat 4 cronyism, destruction of economic continuity, laden with foreign inspired objectives for so-called openness, meritocrasy, and globalisation, and basically aimless.

To those Cybertroopers, out to defend idiot, plse note this commentator is not some 20 or 30 somethign but an experianced 40 something with post graduate education, middle mgmt and entrepreneurial experiance. No propaganda but show me fact and figures shd you wish to deny!

This really good and should be send to Readers Digest (Laughter the best medicine) for prize winning.
Not only that, in the near future we all will see that Malaysian will be the first country in the world to have VVIP demonstrator on the road like what the opposition do last time. VVIP demonstrator by their title - Tan Sri (chaired by Koh Su Koon, Mike Tyson etc), Dato Seri (all former BN PM, DPM, Ministers, MB and CM) and Dato' ( former BN ministers, EXCO members, Division head, YB etc).
Can we imagine when the FRU start spraying the water canon and tear gas.
How wonderfull to see all those once a VVIP jumping and screaming like monkeys oops KJ (Kera Jantan).
I'm sure lots of Malaysians is looking forward to watch the anticipated show of the century.
This will be a reality if Paklah still insist want to be Mr PM.
To all the VVIP you all choose your own detiny. Short term gain versus long term stabilities.
You choose - Rakyat have start choosing the Pakatan Rakyat and now your turn to choose.
My prediction is before Hari Raya Aidilfitri you all will be history like the Dinasours.