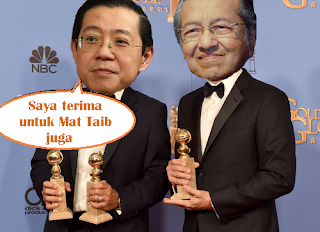 Best performance in ‘The best defence is ignorance’
Muhammad Mohd Taib: Money smuggling? I no speekee Inggeris.
Dr Mahathir Mohamad: PKFZ? I cannot remember the details.
Lim Guan Eng: My new house? I don’t know. I am not a valuer. My wife did the deal, not me. Anyway, it does not come with a swimming pool.

Best performance in ‘National pride costs money’.
Anwar Ibrahim: The RM30 billion Forex loss is not a real loss. It is only a paper loss.
Eric Chia: Perwaja did not really lose money. It just did not make money.
Dr Mahathir Mohamad: Proton needs to lose money. That is the price we pay for national pride.

Best performance in ‘The hand that wields the knife’.
Tony Pua: Tan Sri Khalid is the most honest and hard-working MB in the entire history of Selangor.
Rafizi Ramli: The Kajang Move is to save Pakatan in case Dr Mahathir manages to oust Prime Minister Najib.
Saifuddin Nasution: Khalid is corrupt and has been bought by Umno so we need to oust him and replace him with Anwar Ibrahim…no, hold on, with Dr Wan Azizah Ismail…oops, sorry, with Azmin Ali.

Best performance in ‘Will the real Umno stand up’.
Tunku Abdul Rahman: The day that Mahathir takes over Umno is going to be the beginning of the end for Umno.
Tengku Razaleigh Hamzah: I will never rejoin Umno because it is not the original Umno. It is a fake Umno, Mahathir’s Umno. We must restore the original Umno of 1946.
Anwar Ibrahim: A Mamak Bendahara brought down the Melaka Empire. Now this Mamak Bendahara Mahathir is bringing down Malaysia.

Najib & Rosmah made Malaysia proud when they won the World's prestigious Grammy Award for their infamous song...... "Songlap Songsang".