Would you believe it? PM said he work hard 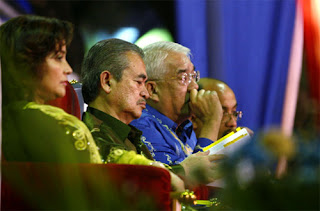 One picture that missed Husin Lempoyang's Premier sleep collection pictures at the launch of Eye of Malaysia launch December 31st 2006 around 11:58 pm.

Headlined as "PM: I work hard to fulfil duties", The Star reported Pak Lah as quoted below:

Ah ... he realised and acknowledged by not denying he is not good and whatever.

"I work very hard. I really mean it and you know it."

You can mean it Prime Minister but I don't know it, I don't see it and I don't find any benefit you have brought to the people and country - social, economics, politics/government.

"I have a very heavy responsibility and I have to carry it out."

You only knew that?

"It is God's will that I become the Prime Minister of Malaysia and I am very conscious that I have to serve the people although I personally do not benefit even one sen because of this."

It is God's will that you are not performing and people are dissappointed with you? Did God say that if you can;t perform, you resign? Aaaa ... I heard that. Sure ... my son did not get Government contract but only from Petronas, privatised company for LRT extension and bus companies.

"These renewals and changes will however, take some time and require the support and co-operation of all Malaysians."

Thats your Prime Minister, Malaysian. Talking without facts, without thinking, without understanding implication. Even lying.

The latest lie being Malaysia's position as 6th in World's Competitiveness Report. Just to answer and rebut opposition, he need to lie and trick Malaysian. We are 22nd position and only improved by 1 from 23rd last year.


You see Malaysians, our new year wishes for the Prime Minister has yet to be fulfilled.

To remind us of his unbelievably dunce of words, there is a great compilation effort of Prime Minster Abdullah's quote by Howsy in his "Pak Lah's Compendium of Flowery Slogans and Quotes" posting and a dedicated blog of the same name for the details.
Nukilan Husin Lempoyang Pada 8:26 PG

Paklah our PM worked very hard but he play harder. Remember he fly to Egypt to launch a career fair there for one day but spend a few more days to do some extra curricular activities. One must work hard and at the same times know how to enjoy life. Who cares as long the Rakyat foot the bills.

Paklah was the ever great leader of the modern world by doing all the corrridors around the country and he really worked hard to prove to the world how STUPID we are.

Paklah has been working very hard all this while to convince therakyat how he cares for them. And now the rakyat start to appreciate the way he cares for them by going for more Demonstrations like Hindraf that ONLY exclusively for those who is a Millionaire. How wonderful this country when all the Indians millionaire to to the street to show that they care also for their beloved PM when they palled to send him 10,000 stocks of roses during the Valentines day b'cos I definately can't afford to send to my wife a dozen roses on that day b'cos it will cost me at least RM180.00 for that. Now you see how hard our PM worked and only the Millionaires know how to appreciated him and in return he gave them another public holiday.

Other races is all dude.